Arizona Republic reporter John D’Anna shares specific actions you can take to ensure seniors and the elderly in your community are taken care of. USA TODAY

Christina Montague’s reason for opening a pot dispensary started from personal experience: Marijuana had helped her with pain management when she was going through cancer treatment.

But through this endeavor, she and her daughter Teesha Montague discovered a community of seniors and veterans in the Ann Arbor area who had similar needs and became their customers but have other needs beyond medical cannabis.

The mother and daughter have made it their mission to help them. They’ve delivered meals to their customers, spent time talking with them at both their homes and at the dispensary and even started a counseling program.

“We really just want to be a positive asset to the community,” said Christina Montague, owner of Huron View Dispensary in Ann Arbor.

That’s always been the goal. The mother and daughter spent a year holding events to help the community understand the benefits of marijuana, and advocating for its legalization in the state. They now own and operate a licensed medical marijuana dispensary, and were recently approved to sell recreational marijuana.

More: Nessel supports release of prisoner with COVID-19 serving up to 60 years in marijuana case

More: More than 1,000 pounds of marijuana seized at Detroit-Canada border

They have a unique perspective. Christina Montague is a retired public school social worker and former Washtenaw County Commission board chair.

By the time she and her daughter opened Huron View Dispensary in 2018, one of the few Black- and female-owned dispensaries in the state, they knew their business would be more than just a place to buy marijuana. 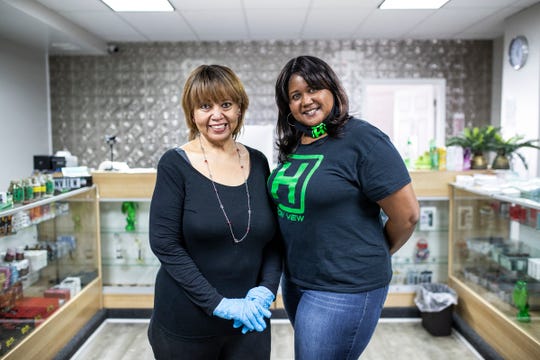 It was in talking to the community that they realized the challenges veterans face. Christina and Teesha wanted to provide a comfortable place for veterans to visit, so they created post-traumatic stress disorder counseling programs.

“We’re bringing something different to the space,” said Teesha Montague. “We care. We want to help break down this stigma of this plant that is helping so many people and changing so many lives daily. People need it to get through their day. And we want to provide it for them in a safe environment.”

A big part of creating that safe environment, she said, was taking the time to talk to customers and ask questions.

“Sometimes I wouldn’t see people for awhile, and I’d say, ‘Hey, where you been?’ ” she said. Teesha Montague is the operations manager of Huron View. “They’d say, ‘I had to decide if I could come get my medicine or get my groceries this month.’ ”

Montague started to hear this from more and more customers, especially those who were elderly and on a fixed income.

“We wanted to alleviate those barriers, but we can’t help everybody and we can only do what’s in our means, so we started to reach out to restaurants to see if they could give me half off a meal or donate a meal,” she said. “It just grew from there.”

For the past eight months, in addition to running the dispensary, she spends her days picking up meals at local restaurants and delivering them to customers. Sometimes she gets them for free, 50% off and sometimes, she just pays for them herself.

One of those restaurants is Cuppy’s Best in Ypsilanti. Before Huron View opened, Teesha held an event to educate the community about cannabis at the restaurant and told owner Andrea White about her idea for the Meds and Meals program.

“People have to eat and some people really struggle with that,” said White. “I wanted to go ahead and help solve this problem. It was the perfect marriage.”

Eight months ago, White began selling about 20 meals weekly to Teesha at 50% off. Soon after, she began donating them in their entirety.

“I wanted to help make her dream a reality,” she said. “Especially during COVID, everyone needs help.”

The pandemic only exacerbated the challenges of getting and affording food. The service has never been more needed.

Many of their senior and veteran customers can’t afford a vehicle, so they rely on public transportation, Christina Montague said. When bus routes were reduced during the pandemic, the customers had trouble making it to their doctors’ appointments and the grocery store.

Then there was the loneliness that came with being stuck at home alone day after day, sometimes going days without talking to anyone.

One of their customers, a veteran, noticed how important companionship was at this time. Teesha Montague is now working with him to create a program that would help veterans buy a cat and pay for their food and upkeep.

“They can talk to them, hang out and that’s their friend,” said Montague. “That’s the only interaction they may have in this time because of how apprehensive people are to be out.”

At the same time, the mother and daughter are facing their own challenges operating a business during the coronavirus pandemic, and as Black business owners during a national reckoning over race.

“It gets hard out here being (some of) the only Black women (in the cannabis industry),” Christina Montague said. “We don’t get those kind of networking deals. The network in this state is basically run by white males.”

They’ve also experienced higher pricing for products as one of the few Black and female dispensary owners, she said, for the flower and other products such as edibles and vaporizers.

“As a Black woman, I don’t get the same prices as many white males,” Christina Montague said. “I have to pay what I know are exorbitant prices. I think it’s unfair. I really strongly encourage African Americans and other minorities to get involved in this business because it will really help stabilize pricing.”

Teesha Montague said she’d noticed some positive signs since the Black Lives Matter protests started in May, with customers driving hours just to visit their dispensary because it’s Black-owned.

But Huron View hasn’t seen the major uptick in sales experienced by other dispensaries over recent months. Huron View is a medical marijuana dispensary, and only recently became a recreational dispensary, too. They plan to officially launch that side of the business at the end of the month.

Still, the mission remains the same. The mother and daughter plan to pursue outreach programs just as aggressively as they expand the business.

“My motto is, ‘What are we here for?’ ” said Teesha Montague. “You have to help out. You have to give back.”